On liminality, not yetness and the pain of waiting 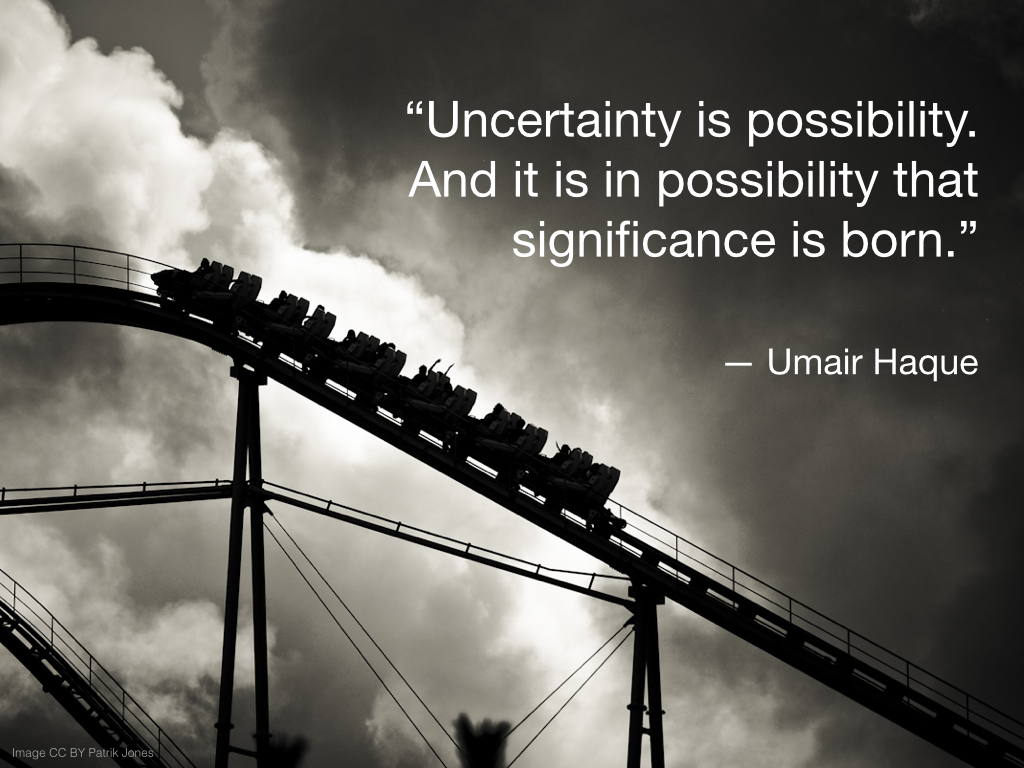 I was on a Twitter binge this morning when as response from Kristen Eshleman (@kresleman) prompted me to look up the definition of "liminal space" - you can find quite a bit of detail in the liminality Wikipedia article. Go read it now or at least skim it (it's pretty long and detailed) - I'll wait while you do that.....

I have several friends that are metaphorically in this state of uncertainty, becoming, passage, change, transition - whatever you want to call it. In fact, living in this state seems to be more the norm than the exception - think how we value "ability to tolerate ambiguity" or "quick adaptability to change" as qualities we look for, both in our friends and in our coworkers. Furthermore, the "liminal space" is clearly a state of great creativity - I'm reminded of those moments between sleep and awakeness where the line between fantasy and reality is so blurred - it's a creative space, and a scary one, a moment of possibility and fear.

Kristen reminded me of the wonderful blog post by Amy Collier (@amcollier) on not yetness - and how this space of uncertainty and "mess" and becoming is where so much learning - maybe all learning - takes place. We have to pass through these liminal spaces to grow and learn and to transition to what we can become - and sometimes it's exciting but it's also disorienting and frustrating. We can be in the liminal space and thrilled by the possibilities, or we can just want to get through and get to the answer. That's when the liminal space feels more like the waiting room, or being on hold, and that feels more like pain than opportunity.

"Waiting for Godot" might be viewed as an extended riff on living in a liminal space; the Wikipedia article relates liminality to the trickster figure in folk culture. Is the trickster having a good time? It seems like a lonely road to be on. If it seems like this blog posting is stuck in the middle and going nowhere, you're probably right.