I've been thrilled to watch what's happening at Next/Thing Co, not only because their latest project, the $9 computer, has been a huge Kickstarter "hit" (closing in on $1.8 million), but also because I'm a proud uncle - my nephew Thomas is an industrial designer who's part of the founding team. Perhaps the biggest long-term impact of Next/Thing is their commitment to openness - not just open source software, but open sourcing the hardware. All the schematics will be online, and their message is - buy it, hack it, mod it, build your own. They have truly taken the hacker ethic to heart and it's great to see the impact that they are making.

They've just released a video on the design of their handheld "Pocket C.H.I.P.", a $49 portable - take a look at the video to see what I'm talking about.


Designing PocketC.H.I.P. from next thing co on Vimeo.

I love this video, because it demystifies the process of design. It says to me not that design is easy (becoming a GOOD designer takes a lot of training and a lot of hard work) but that it's ACCESSIBLE - see, this is fun and interesting and if you want, you can do it too.

Let's contrast this to the most famous design-driven company, Apple. Apple is famous for its secret design studio, to which only the specially anointed are allow admittance. For example, here's how it's described in a recent New Yorker profile of Apple design guru Johnny Ive:


An invitation to visit Apple’s studio is rare, and is withheld even from most employees. Inside the door, a ten-foot-long internal vestibule, in stainless steel, serves as a visual air lock.

The Apple mythology is that these are special people performing an arcane and priestlike process that yields magnificent design. And no doubt, Apple has build some beautiful and amazing stuff. But Next/Thing Co presents a different vision, a sort of Protestant Reformation of the design church. Design for the people! How cool is that! I hope they continue to be successful and that from their work a 1000 new designers are born.

Tools of Empowerment, Enlightenment, and Excitement

In the latest post in his wonderful blog More or Less Bunk, Jonathan Rees quotes from the book Clio Wired edited by Roy Rosenzweig:


“Although a Luddite resistance to technological change may seem appealing at times, we would argue instead that it is worth engaging with these new technologies in an effort to try to insure that they indeed become badly needed tools of empowerment, enlightenment and excitement.” - Roy Rosenzweig & Steve Brier, 1994

This summarizes an argument that I've been trying to make in recent years in presentations and discussions with faculty and others. Change is here - technological, demographic, political, and economic. If the educators that care about students don't find a way to respond, the future of education will belong to those who stand to profit economically or politically or both. Who will build the universities and colleges of the future - those who understand the history and share the values of the educational enterprise, or those who simply want to make a buck?

The Great MOOC Scare of 2012 has resided and the rise of well-funded ed tech startups with (largely) goofy or ill-considered products may be near the bubble peak - at least, we can hope. But the fundamental forces that act upon our institutions are not going to disappear. I salute Jonathan and others who have the courage to explore new ways of reaching their students and learning to navigate of the technology sea we find ourselves sailing on. These are the innovations that can set the course for the future while valuing the past and keeping the focus where it belongs, on our students and our communities. They are building tools of empowerment, enlightenment, and excitement.

Posted by amberman at 3:53 PM No comments: 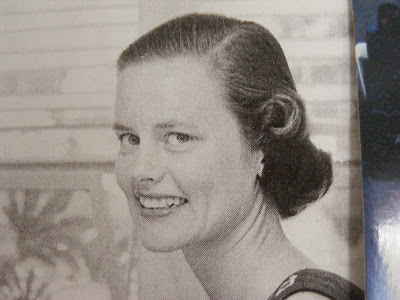 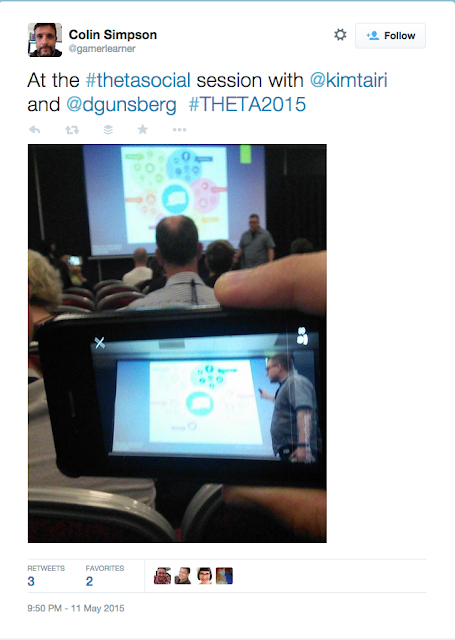 Last October at the EDUCAUSE Annual Conference in Orlando, Raechelle Clemmons ("CIOs Sound Off: To Be, or Not To Be, Social". The idea originally was to present a sort of debate about the advantages and disadvantages or participating in social media, particularly Twitter. The session was Rae's idea, and we brought in Dee and Jack to present the "anti-Social" side, but most of the audience were already involved in using Twitter as a professional resource and were largely interested in discussing how to do so effectively.
@rclemmons) and I, along with Dee Childs & Jack Suess, presented

One of the participants, David Gunsberg (@dgunsberg) liked the concept so much that he recruited Kim Tairi (@kimtairi) to present a similar session at THETA 2015, being held this week at Gold Coast, Queensland, Australia. For their session, they decided to take things to a new level by inviting me & Raechelle to watch & participate via Twitter from California.

The first challenge of course was figuring out when 1415 Australian East on Tuesday would equate to for me & Raechelle. With the help of a handy time calculator I determined it would be 9:15PM on Monday for me, and a couple of hours later for Rae in Wisconsin. Then the schedule got shifted 30 minutes later, not so bad for me but too late in the evening for Rae.

The choice of Periscope to present the audio/video was the most unusual part of the experience. Periscope is a personal video-streaming tool for iOS devices, which they had running on Kim's iPad Mini in the room. Periscope is essentially one-way (you can respond with text comments) and has a very simple and clean interface. It worked extremely well for me - I could see the slides and the presenters (they walked in and out of view) and hear everything. It did freeze briefly a couple of times, but not enough to break my concentration. It also had a remarkably intimate feeling to it - I was getting the view from a table near the front of the room rather than the typical conference streaming from the back. I could see David and Kim when they set it up and finished, talking directly to me. It was a remarkably engaging experience, much more so than the typical "virtual conference" environment. 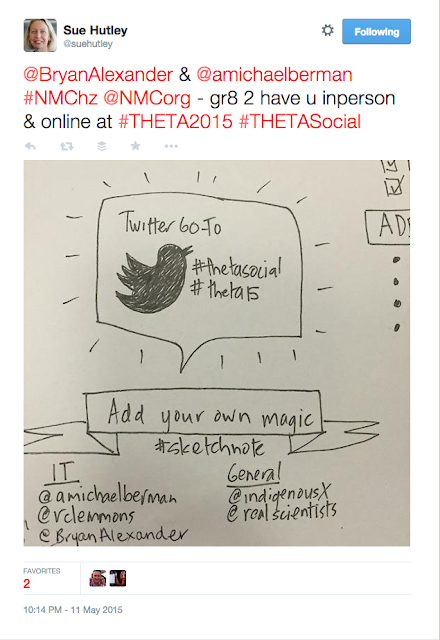 In addition to tweeting, I was able to participate in the poll questions which they offered via PollEverywhere. It was fun to be able to compare my answers in real-time to the people in the room. At first I was a bit stumped about how to respond - my phone was tied up using Periscope and I was busy tweeting on my laptop - but then I realized I could tweet my poll responses to @poll and it worked like a charm.

This was my second encounter with immersive international participation in a conference, but from the "other side" - I interacted multiple times Maha Bali (@Bali_Maha) who describes her experience here. We've been talking about the potential for technology to eradicate the boundaries of distance for a long time, but I think we're just starting to see what we can really do and we have barely begun to comprehend what it means.