Virtualizing the Right Part of the Conference 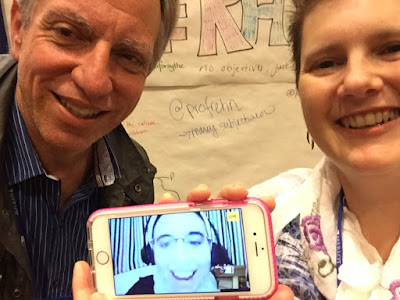 (Note: The posting originally appeared as a guest post at Virtually Connecting - thanks to Rebecca Hogue and Maha Bali for encouraging me to write it.)


I'm so pleased to see the interest and attention that the Virtually Connecting project is getting. Our traditional models of conference attendance are not only dated, they exclude many people - those who can't travel to attend in person because of health, location, family, and most often finances. We need to figure out how to offer new options, but how?

We already know how not to do it. About 10 years ago I got a chance to experience HP's "Halo" telepresence system. The promise of Halo, and Cisco Telepresence and other systems was that low-latency, high resolution video and audio, combined with careful design of lighting and furniture, could allow widely separated teams or individuals to meet remotely while creating the illusion that they were in the same room. The tech was impressive, but there were big problems with the model - the equipment and connections were prohibitively expensive for all but those with the deepest pockets, and you needed to schedule a time and a place for a formal conference. HP got out of the business a few years later, and while others including Cisco still push expensive teleconferencing systems, I haven't found them to be particularly effective for most uses in education.

One insight into the limitations of expensive, fixed telepresence systems came to me about a week after I visited HP's Halo. I was speaking with a colleague who was describing corporate meetings in Japan. He told me about a culture where meetings were a tightly orchestrated and constrained form of communication, in which very little authentic feedback was given. Instead, the real meeting occurred later with alcohol and karaoke - an environment where the individuals were freed to discuss what they REALLY thought. It occurred to me that most models of remote meeting virtualize the least useful portion of the communication.

Now translate this to virtual conferences. What works well? Consider keynotes. Personally, I find that watching an 18 minute TED talk without distraction only happens when I really care about the topic, and it's a really excellent presentation. I've seen a few wonderful conference keynotes, but it stretches my attention to sit through the average 60 or 70 minute keynote when I'm in person. On line? Not likely to happen. Besides, so many keynoters give the same talk over and over and you can find a version of it on Vimeo or youTube anyway.

How about conference sessions? The best sessions are interactive and involve the audience. Set up a camera in the back of the room pointed at the front and broadcast the PowerPoint - that's a recipe for faithfully recreating the virtual experience of a boring lecture. To me, the whole notion of "lecture capture" is so deadly that I like to refer to it as "lecture capture and release - capture the lecture and take it far away to release it where it can do no harm."

I go to a conference for the interactions, the buzz, the sense of what (and who) is new and different, the trends, the issues. A typical virtual conference, a camera in the back of the room and a PowerPoint feed, gets you little of that. Maybe if there's a good Q&A session AND the people in the room manage to remember to use the microphones, you might get something, if you can wait through the talk to get to the Q&A. The best sense I get is usually the Twitter feed - sometimes you can get a lot, and other times it's just confusing without the context of the conference.

And that brings us to experiments like Virtually Connecting. It's personal - the connection is usually, literally, in someone's hand, rather than mounted in the back of the room. An iPad is not the world's greatest teleconferencing tool, but it's relatively cheap, it's portable, and it's personal. Google Hangouts is free and it's mostly pretty good, and it works fine with the bandwidth at many locations, even overseas. I've also used Zoom (my personal favorite) as well as watching a session via Periscope which works surprisingly well. There's a big psychological difference between watching a feed from the back of the room - clean, cold, impersonal - versus a tablet or a phone propped on a desk with someone's backpack - warm and  human-scaled. The audio and video might not be as good, but the immediacy and the sense of connection is heightened. You feel like you're in the midst of the action rather than watching from afar.

I've been on both sides of the conversation and it's a qualitatively different experience. When you're physically present at the conference sharing with someone remote, you're trying to figure out what that person wants to know and what they've already heard. When you're remote, you're trying to decide what would be a good question to ask to get a sense of what's happening there. It's a somewhat different kind of social interaction and I think it will take most people a little bit of time to get used to it.

But the chance to ask a few questions and see the response is just marvelous. It's deeper and richer and more personal, and the slightly underground feeling adds an authenticity and appeal that draws you in. This is worth so much more than high def video with perfect lighting. People can speak naturally, and it's more like the karaoke bar than the Halo room.

The beauty of Virtually Connecting is that Rebecca and Maha have figured out how the virtualize the right part of the conference - the personal interaction. I'm thrilled by their experiments and I'm sure they will be widely imitated. I'm glad I've had opportunities to experience Virtually Connecting and look forward to more chances to try it out and build connections from afar.